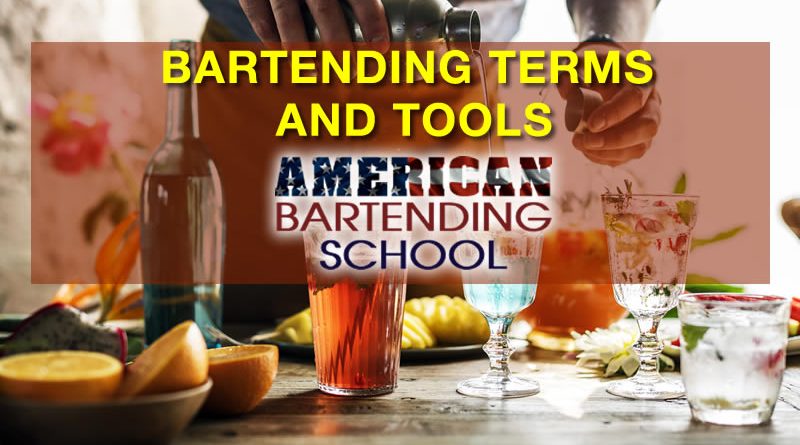 Whatever you choose to call them; whether bartending terms or bartending lingo, they mean the same thing – the words you will need to familiarize yourself with which you will be using in your day-to-day activities as a bartender. It is not so hard to learn bartending terms, and that is why we want to introduce you to these terms. Consider this to be the bartending dictionary that you can refer to at any time.

1. Back
This is a small glass of anything such as cola or water that is served with a drink. For instance, Scotch on the rocks with a water back.

2. Bar Spoon
This is a long spoon that is used for mixing. It usually comes with a lemon zester or something that looks like it at one end.

3. Bitters
This refers to an alcoholic herbal blend which is used to enhance the flavor of cocktails. An example of bitters is Angostura which was invented in 1824 as a cure for stomach maladies, but it has evolved into bitters in many bars across the world.

4. Blend
This means mixing of ingredients with ice in an electric blender. In some places, it is called blended drinks or frozen drinks.

5. Build
This term means making a drink with ice as the foundation and then building the drink by adding other ingredients such as alcohol, juice, etc.

6. Burnt
This means a mixture of scotch with martinis. In some recipes, the mixing ratio of scotch to gin is 1:2 while some other recipes involve adding a drop of peaty single malt; swirling it around the glass and then throwing it out before adding the gin. A burnt martini is not exactly a martini because it does not contain vermouth.

7. Call Drink
This is when a customer specifically orders for a drink, and they mention the name of the liquor and that of the drink they want to mix the liquor with. For example, Bacardi and Coke.

8. Chaser
This is anything that is consumed after taking a straight shot of alcohol. The job of the chaser is to reduce the strength of the alcohol or to mask the taste of the alcohol.

9. Cocktail
This is a mixture of alcohol or any other liquor with a mixer like juice or soda, and it is usually shaken.

10. Cooler
This is a bottled beverage with an alcohol base, and it comes in different flavors. For instance, Smirnoff ice.

11. Dash
This refers to a small quantity of an ingredient.

12. Dirty
This is used to describe a Martini that you have added olive juice to. This makes a Dirty Martini and the more olive juice you add to a Martini, the dirtier the Martini will be.

14. Flame
This involves setting a drink on fire. This requires a certain level of skill. For example, with Sambuca, you light it first and let it get hot before turning off the flame and drinking it. If you are not very skilled, do not attempt to flame drinks.

15. Float
When you place one alcohol on top of another alcohol in a shooter glass. For example, a B-52 shooter comprises of Kahlua, Grand Mariner, and Irish Cream. Irish Cream is lighter than Kahlua and heavier than Grand Mariner, so they all float on one another. You can do this by pouring each of them carefully down the side of the glass. You can also use an inverted bar spoon and allow the alcohol trickle down the spoon in multiple directions.

16. Free Pour
This is when you mix drinks without measuring them with a measured pour sprout or jigger.

17. Frost
To make a frosted glass, dip it inside water, allow it to drain and place in the freezer. This makes the glass frosty and is quite effective with beer mugs.

18. Garnish
This refers to an extra thing that is added to a drink apart from the ingredients to make the drink look or taste better. Example of garnishes includes lime wedges, slices of lemon, olives, cherries, etc.

19. Jigger
This is a measuring device with an hourglass shape and made of steel.

20. Mixer
A mixer is a non-alcoholic drink that is served alongside alcohol. Coke is the mixer in a Rum & Coke drink.

21. Muddle
This is used to crush ingredients in another tool known as the muddler, and it is used to create drinks like the Mojito which involves extracting flavors and essential oils from the mint leaves.

22. Neat
A neat whiskey means a shot served directly out of the bottle without ice. This shot must also be served in a whiskey glass. Take note of that.

23. On the Rocks
This refers to a drink that has ice in it.

24. Sangria
This is a cocktail made from wine, fruit, orange juice and triple sec. Although there are different variations and some may not contain triple sec or may contain a different juice from orange juice. Sangria is based on wine and juice.

25. Shooter
A shooter is a serving of a straight liquor or a mixture of alcohol and is usually taken in one gulp. A shooter or shot is usually 1 to 2 ounces.

26. Speed Rail
This refers to the long shelf made from stainless-steel which is connected to the ice well and the front of the sink behind the bar. This is where the common liquors are held; for example, vodka, rum, gin, and other popular liquors and mixes.

27. Straight Up
This is a drink that is shaken in a shaker and strained into a glass. An example of a “Straight Up” is a martini, and in some places, it is called “Neat.”

28. Strain
This means draining the liquid out of a shaker tin.

29. Toddy
This is a sweetened liquor mixed with hot water and spices, and it is usually served in a tall glass. 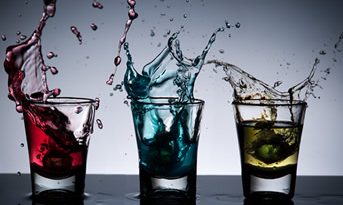 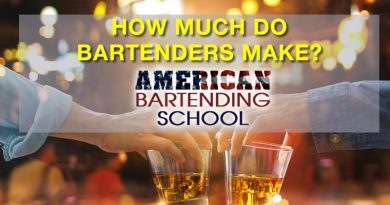 How Much do Bartenders Make

April 16, 2019 chrisjo Comments Off on How Much do Bartenders Make

How Much do Bartenders Make

April 16, 2019 chrisjo Comments Off on How Much do Bartenders Make

April 16, 2019 chrisjo Comments Off on Careers For Bartenders
Why Bartending School

Why Bartending School is Important

April 15, 2019 chrisjo Comments Off on Why Bartending School is Important
Bartending Careers

Is Bartending Right For You

April 15, 2019 chrisjo Comments Off on Is Bartending Right For You

American Bartending School trains bartending techniques, how to use bartender tools, how to mix and service liquor and wine, and much, much more!

Reserve your place in the behind-the-bar, hands on training program to teach you all the basics to work as a bartender.

In 2 weeks you will learn what you need to know about bartending and  the career choices in bartending that prepare you to apply for jobs full or part-time.

In only 2 weeks you can be fully trained and ready to begin making money with your new found skills.